What was that Ben Franklin said about guests and fish? 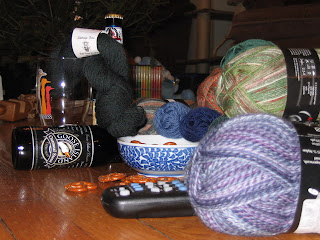 We had plans of leaving for after I got back from work the Thursday before Christmas. But I got back from work later than I had hoped, and we really weren’t packed at all, and I wanted to drop some presents by a friend’s place. She has small kids, and I get that it’s important to have Christmas Presents On Christmas Morning, Even if The Felted Hedgehog Is Not Dry.

So with the packing and the hustling and bustling in the apartment, we didn’t notice right away that there was someone on the porch tapping on our front window.

“Jeebus! What the fork is that?!” I exclaimed. My mother-in-law doesn’t allow swearing, so I was practicing.

The Fool pushed the curtains aside and took a look.

“Huh,” he said. “It’s woolly. I wonder if it’s from that living nativity the Baptist church had a couple nights back.”

He stared for a moment more.

“Call the cops,” I said, handing him the phone.

“Let me in, goddammit, it’s cold out here! You want me to get ice balls in my fleece?”

The Fool opened the door, and in barged Dolores, bundled up in a wool overcoat (I ignored the irony.)

She stepped on my foot with a sharp hoof as she pushed past, and emptied a carpetbag upside down on the living room floor.

“There,” she said. “You stay here with Auntie Meg and the Fool until and I come back to get you.”

A half dozen balls of sock yarn shook themselves and settled into an attentive heap, trying hard not to gawk as they looked around.

“Dolores,” the Fool said, “You can’t leave them here. We’re going out of town tomorrow. Who’s going to take care of them?”

“They’ll manage fine on their own – just leave a takeout menu and a little cash by the phone. Now, I have to go to Aidan’s, so you all get acquainted.”

But Dolores was gone, hustling out my door again and into a waiting cab. No wonder she hadn’t started sniffing around the liquor cabinet; the meter was probably running.

With some reservations, we left for the next morning. The sock yarn had curled up in a basket and seemed to be sleeping through the long winter’s night. I tried calling the cats a couple times to get a report, but cats are notoriously unreliable about answering the phone or returning messages left on the machine.

What with the total lack of opposable thumbs in the apartment over the weekend, I don't quite understand how the goings-on were documented, but they were.

Here, the lads seem to have settled in for the evening. 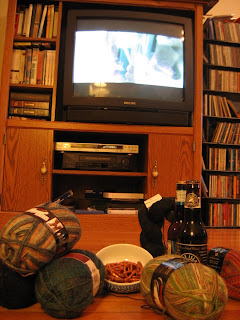 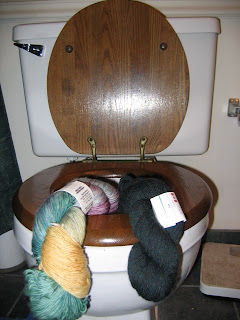 Some of them apparently overindulged. They left lint all over the bathroom rug, too.

Knowing that Franklin is an erudite fellow, I was a little surprised to see what the sock yarn preferred to read. They tried telling me they only bought it for the short fiction, but I said in that case, they could have read the New Yorker or the short stories of F. Scott Fitzgerald, either of which was sitting around. 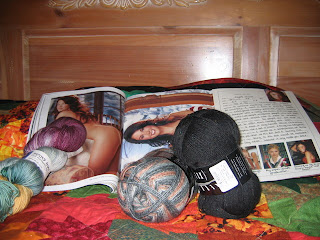 The Dynamic Duo better retrieve their wayward fiber soon, because we have a gig in St. Louis this weekend and don't want to have to take a whole basket of sock yarn with us. They're not staying home by themselves; I don't know how Franklin does it.

Thorny said…
Who knew sock yarn could be such rambunctious houseguests?!
2:36 AM

LaurieM said…
Good for a chuckle. Thanks!

How did they manage to survive the cats?
5:47 AM

meg said…
They probably scared the cats under the bed. Our guys talk a big game, but they're wusses.
7:57 AM

Lanea said…
And here I thought it was my cat Yarrow stealing innocent, immobile sock yarn, dragging it around the house, drooling on it, and causing all that mayhem. You mean the sock yarn is both ambulatory AND full of sin? Oh my. Help me Jeebus.
8:24 AM

meg said…
Sock yarn is indeed ambulatory, and as far as full of sin? I think maybe I just got the rowdy ones. Aidan says his houseguests are into books on tape and PBS.
10:50 AM

Annie said…
Laughed out loud. And had to explain to passing muggle relatives about the sock yarn hanging from the toilet. "It's a joke, right?" he said... Hmmm. Muggle indeed.

You can bring the yarn with you if you can get it on the plane -- we'll watch it for you here in the Lou while you do your thing...
1:12 PM

meg said…
Heehee. The Fool was very concerned that I might accidentally drop some yarn *in* the toilet, esp. the Socks That Rock. We're driving, not flying, so I guess there's no good reason we couldn't drive with a basket of yarn in the car ... sanity aside.
2:02 PM

Thanks for the laughs!

Aidan said…
I like to think that I ws able to exert a moral authority hitherto present in their lies. No disrespect to Franklin, who I am sure is doing the best he can in a difficult situation, but the all the sock yarn needs is discipline and structure -- tow things they don't get with Dolores. Let's face it, Dolores makes Auntie Mamie look like Mamie Eisenhower.

We've been having a ball. Meri has taken up Japaese caligraphy, Lorna is hart at work on her first concerto, and the rest have been enthusiastic participants in a West Wing marathon. We've made it through Season One and half of Season Two. (We are almost to the kidnapping -- how exciting!)

I do think that someone has been imbibing while my back was turned. I am certain we had a full jar of Nestle's Kwik yesterday, but I'll be dampened if I can find it today.
4:34 PM

sheep#100 said…
I had no idea that Franklin's sock yarns had such carnal natures and addiction issues! They must have been hanging around Delores too long.
5:34 PM

meg said…
Aidan - my sock yarn beat up your honor student. Or something like that.
10:11 PM

Aidan said…
I would like to state for the record that every one of the 32 typos in my earlier comment can be directly attributed to Nyquil.

We are all going on a little outing this morning to the "What People Eat" exhibit at the Museum of Science and Industry. But first Trekking is putting the finishing touches on a brie en brioche, Silky is working on a charcuterie board, and the yarn voted for chocolate milk as our beverage for the evening, so I'm off to make some homemade dark chocolate syrup.

I promised the yarn if they took a good nap this afternoon, they could stay up until midnight.
9:15 AM

Anonymous said…
So that's where lint comes from. Here I thought you only got "yarn barf" from center-pull balls. Live and learn.
12:07 PM 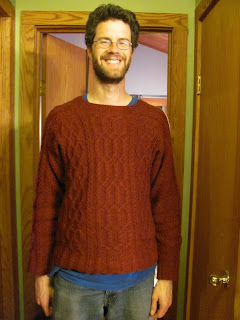 Making good on my threat